The Stevenson is a beautiful pattern very reminiscent of a Parson or Ranger in it’s construction. Kelson gives the credit for the invention of this pattern to James Wright, with Frodin adding a date of ca. 1850 to this notation in his book.

There are four of the old masters who list a version of the Stevenson in their inventories of flies, they are Kelson, Hardy, Maxwell and Pryce-Tannatt.  There is also at least one, possibly more other versions illustrated in books with no pattern being given, just the name.  Of all of these, Hardy and Kelson are identical, which leaves four similar but different flies for us to describe.  We will begin with the pattern as per George M. Kelson, from his book "The Salmon Fly." 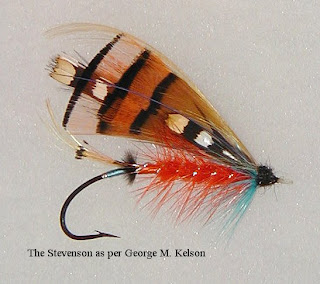 Kelson writes a note following the description for a variation as used on the rivers Wye and Lochy.  Wings are to be veiled with Teal, and in the tail, summer duck is to be used instead of tippet.  This addendum is not copied by Hardy, though the pattern is.

Sir Herbert Maxwell’s lovely pattern is distinct from the other two patterns in the construction of the wing, as we shall see.  Judging from the way he listed the pattern, I think he views it as a cross between a Parson and a Dandy, listing the pattern as:

“Tag, Tail, Body and Hackle as in the Parson, except that the shoulder hackle should
be bright blue dyed cock's or (better) Indian Jay. Wing, &c. As in the Dandy (No. 8).”

Translating this into a standard format, the pattern reads as follows: 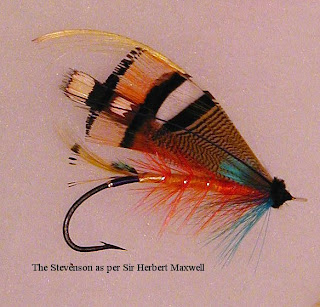 He records a small historical note: “I have a double hooked Stevenson of my own dressing,which I lost in a fish on the North Tyne one day in 1873. Two days later, the Duke of Northumberland caught this fish, 17Ibs., about half a mile higher up the water. My fly was sticking in its breast; I put it on my line and landed two fish with it the same day. Sizes,16 to 5.”

Dr. T. E. Pryce-Tannatt says nothing about this pattern, simply listing it as a “whole-feather wing” with a bunch of other patterns.  His version is as follows: 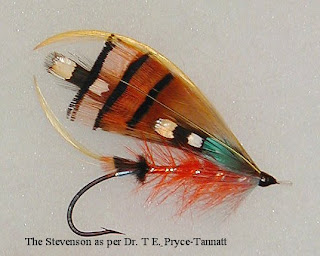 An interesting illustration from William E. Hodgeson's  “Salmon Fishing”…  (1920) shows what I initially took for a Maxwell version of the Stevenson, but upon closer examination discovered some interesting differences.  For one, there is a clear and distinct Ranger wing (doubled tippet over long jungle cock) and a butt, absent in Maxwell's version.  Missing also from this pattern is the standard chenille head, the chatterer cheeks, and the tail clearly has barred wood duck or teal instead of  tippet with or with out chatterer.  In common with other Stevenson patterns, the tag is light blue, rather then the violet that Maxwell prefers. Lastly, the ribbing is a broad flat gold, rather then silver twist.  Otherwise, this fly appears to conform to Maxwell's version as far as I can see.  Since I can find no written description included in this book, I am going to have to guess.  I think the pattern is as follows, based on the illustration:


Discussing this with Monte Smith, he brought up some very interesting points.  It is possible that the tinsel could also be broad silver with gold oval backing it.  This would tend to pick up more orange from the oval gold and the fur also, making it appear silver.  His monitor shows the floss as a light orange, perhaps the Glasso Orange shade in the Japanese silk.  He also sees teal in the tail and not the barred wood duck.  Looking more closely I tend to agree with this myself.
Posted by atlanticsalmonflyguy at 8:02 PM