In 1821*, Alexander Mackintosh wrote the first known description of the fly known as the Black  Dog in his book “The Driffield Angler."  Used on the Tay, for Atlantic Salmon, it was popular and successful.  His pattern is as follows:
“The hook, no. 1, and the shank near 3 inches long; the wings, the bluish feather from the herons wing intermixed with the spotted reddish  one from the turkeys tail; feathers for the body, lead coloured hog’s soft wool from under the  ear, small gold twist, a large black cocks hackle; the head a little dark green mohair and dark green silk. “

He proceeds to describe  the making of this fly, which really is not too difficult to follow.  The interesting bit however that bothered me at the time, but I did it anyway, is he describes running the twist between and around the wings “three or four times… making it appear as much as possible about the head.”  He then covers this with the mohair.  Interesting and once done, it serves to insure that the two wings never will fold together again except under extreme pressure. 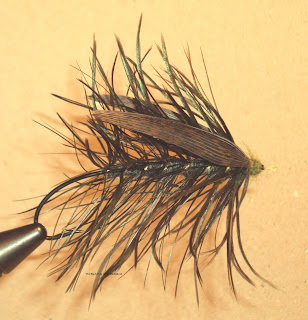 The fly you see on the left is the Mackintosh version true to the pattern in all respects.  The hackle is tied in full and facing backwards to present a sleek but bushy profile.  I married, strand for strand the two wing components, though I am certain that this was not done in the original.  I suspect that either one or the other was tied in as shown, with the second either as strands under or over, or both were tied in as mixed strands and separated into two bunches with the twist.   I thought that this would be a much nicer look though, despite it taking more time to marry the wings then it did to do the rest of the fly, including mounting the wings.

*An interesting note on this flies history:  Eric Taverner, in "Fly Tying for Salmon," 1942, pg. 11,  writes that the Driffield Angler was "issued" in 1808, and also states, "Mackintosh says, 'I caught one when angling with the fly at Castle-Menzies in the year 1765, that weighed fifty-four pounds and a half.' He mentioned this fact to call attention to the weight of the fish, not to emphasize the use of a fly which must have been an ordinary lure at the time."  The fly both of them are referring to is the original Black Dog, a pattern Taverner gives as identical to the one already given by Mackintosh and quoted directly from the 1821 copyrighted edition I have the PDF scan of.  I have done intra-document searches for every single word in the above Mackintosh quote, and can find no such quote in my version.

In 1847 Thomas Tod Stoddart published a book entitled “The Anglers Companion to the Rivers and Lochs of Scotland,”  William Blackwood and Sons, Edinburgh and London, wrote the second description of the Black Dog that I was able to find.  On page 240, in a table labeled "Flies for the Awe and Urchay Rivers - Mr. Lascelle's flies, he lists the following pattern, under a subheading Flies for the Urchay:

This is basically the same pattern as above with the slight alteration in body material, changed from pigs wool to mohair.  The only question remaining is: Who is Mr. Lascelles?

Francis Francis, in 1867 wrote in his book “A Book on Angling” the next description, and in it we can see the changes the fly had undergone over time.  In the picture below, you can see how the body has become black and extra ribs have been added.  The wings have changed to a predominantly grey tone, and the green mohair head is gone, as are the gold tinsel wraps around the head.  The pattern, from page 363 of the Classics of Salmon Fishing edition is as follows: 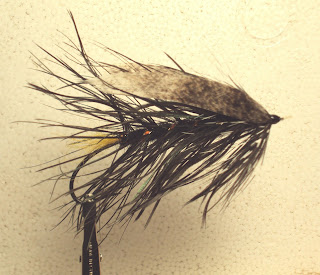 “The Black Dog- Tail, a tuft of olive-yellow pig’s wool; body, black mohair; gold and silver tinsel with orange silk between; two or three black hackles; gallina at the shoulder; wing, grey speckled turkey, two long slips.  The hook is 3 1/2 inches long and 7/8 of an inch wide, and the succeeding flies rundown to  2 inches or even smaller.”
Again the fly is tied as per the materials listed, though I only needed one good long hackle instead of the two or three shorter ones.  I used an oily green-tinted natural black one for a nice effect.


I mentioned the edition I used as there are other editions of this work.  I have on cd a pdf scan of a
different edition, published in 1920, edited by and with a lengthy forward by Sir Herbert Maxwell, where, though the pattern listed is identical to the above, there is a lovely colour plate of a fly labeled The Black Dog that looks nothing like the described pattern, but instead resembles nothing less than  a stripped down version from the next person to take up this pattern, George M. Kelson.  The pattern in the illustration can best be described as follows: The hook is quite long, as expected.  The illustration  provided above is scanned directly from the PDF scan of the original book.  The photo below is my interpretation of the image. 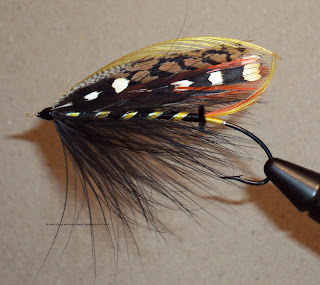 I have repeatedly combed both editions for the actual written mention of this version, with no success.  The question remains, How did this fly, obviously a more modern version,  get into a book published in 1865?  I suspect that what happened is that during the process of editing the 1920 version, Maxwell decided he needed new plates for the flies.  Choosing popular flies, he commissioned the plates, but did not cross-reference the fly with the pattern in the book.  As he did not actually write the book, he may have been unaware that the pattern and the plate did not correspond with each other.  Francis Francis was dead by this time and could not tell him either.  I will have to check and see if some of the other flies illustrated show similar pattern shifting.  If this is the case though, then the version Maxwell chose was not his or Kelson’s, but the fly of the day as it were.  Compare it with Kelson’s or Maxwell’s and see how it has been simplified.

George M. Kelson, in 1895 or 6, published his book "The Salmon Fly" and in it is a pattern he describes as ” An old standard of my father’s, and a useful high water fly – very good on the Spey, Wye, etc.” 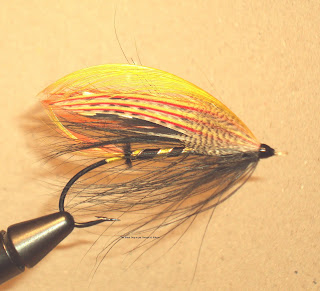 The pattern, much like the above only more so is as follows:
Tag: silver tinsel, canary floss
Tail: topping and scarlet ibis
Butt: black herl
Body: black silk
Ribbing: Yellow silk, and oval silver tinsel running on each side of it.
Hackle:  Black heron from the third yellow rib
Wing: two red-orange hackles back to back, enveloped by two long jungle cock, unbarred summer duck, light bustard, Amherst pheasant tail, swan dyed scarlet and yellow, and two toppings.

This is the pattern most people know and tie today.  I have done the wing in the style Kelson personified, ie strand for strand marrying of each of the sections, repeating at least three times.

Next to describe the Black Dog was Sir Herbert Maxwell in his book “Salmon and Sea Trout,"  1898.  He writes of the Black Dog: “This is the modern version of a very old Tay pattern.  Black used to be the prevailing tone, but gay colours have been added to keep it abreast of the fashion.  It is used as a large Spring pattern, 20-17.”  I have a first edition that lists the pattern as follows: 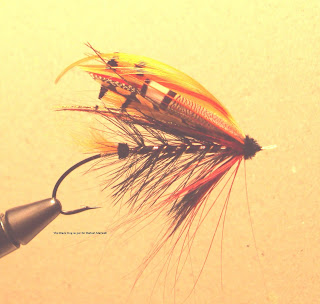 This is clearly not the fly in the 1920’s version of Francis Francis either, but is a lovely fly none-the-less.  It obviously did not resonate as well as the Kelson version with the fishing public though, since it is not the pattern most folk know today.

Another author who described the Black Dog was Capt. John Henry Hale in his “How to Tie Salmon Flies” 1892.  His version, attributed to Mr. Malloch is as follows: 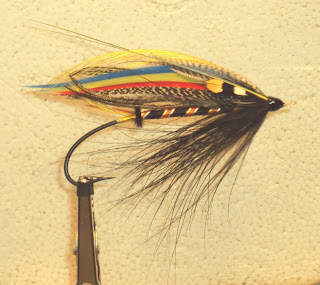 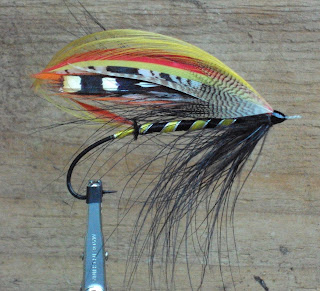 The only other old author I could find who listed the Black Dog is  John James Hardy in his book “Salmon Fishing” from 1897.  The pattern he describes is identical to Kelson’s pattern, as are a lot of the flies in his book.  In this rendition of the pattern, I tied it as Hardy might have, rather then as Kelson would have.  The wings are done in single strips rather then in married strands, what I refer to as Kelsonized.

There is one other pattern that has been published that I am aware of, and as far as I can tell incorrectly attributed to Francis Francis by Mikael Frodin in his marvelous work “Classic Salmon Flies, History and Patterns” from 1991, Stoeger Publishing Co.   In his account of the Black Dog he describes the actual Francis Francis version accurately, then goes on to talk about a second version, “more like the one Kelson provides.”  It is as follows: 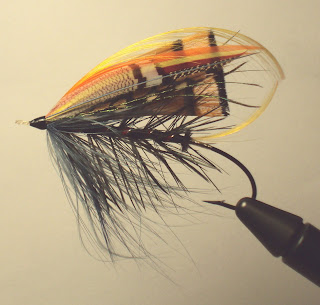 Tag: silver tinsel
Tail: a topping
Butt: black ostrich herl
Body: black floss
Ribs: silver and gold tinsel and red silk, side by side.
Hackle: black all the way up
Shoulder: a very long fibred heron’s hackle dyed blue
Wings: a mixed wing, the underwing a tippet feather with slices of wood duck over, the overwing mixed fibres of golden pheasant tail, bustard, claret, yellow and orange swan, speckled peacock and some peacock herls, blue and yellow macaw and a topping over all.
Head: black

This lovely fly is much more like Maxwell’s version in my opinion, then like Kelson’s.   It does not resemble the written Francis Francis pattern in the least however in either of the two editions I have examined, and only marginally resembles the illustrated version in the 1920 edition of the same author.   I have been unable to discover the correct author of this pattern,  and emails to Mikael Frodin have gone unanswered.

Since the writing of this, I have stumbled on yet another old Black Dog.  In "Salmon Fishing," by William E. Hodgeson, 1920, is a lovely set of colour plates, showing a variety of salmon flies popular at the time.  Amongst that lot is a lovely Black Dog that is clearly not like any of the above, including the elusive Frodin pattern.  Sadly however, this pattern is not shown in enough clear detail for me to accurately decipher it's make-up and tie a copy of it.  What I can make out is that it has a yellow rib, bordered by oval silver tinsel.  It has jungle cock and barred wood duck cheeks, as well as jungle cock in the under-wing.  There appears to be peacock herl in the wing, as well as a lot of golden pheasant tail, with a distinct strip of yellow and possibly claret or red and something barred/speckled probably turkey or bustard.  Hackle is at the shoulder only.  Topping and tail appear standard, with red ibis in the tail and one single topping over.  No horns are visible.  Tag/tip is silver and yellow silk.   This pattern is not described in text at all, and I have seen no accounts of this version elsewhere.  It is yet another mystery in this puzzle, to be pieced together and tied eventually.

Currently this is the extent of the research results for the Black Dog.  I welcome any additional information on this fly, especially if it is verifiable information on the origin of the “second Francis Francis” pattern and the actual pattern and attribution for the one in the plate in the 1920’s edition of Francis Francis “A Book on Angling.”
Posted by atlanticsalmonflyguy at 6:37 PM